Without doubt, the one tray manufacturer any collector of these lovely items could name first is that of Reginald Corfield Ltd. The Company was the most prolific post-war waiter tray manufacturer particularly during the 1950’s. Despite Reginald Corfield Ltd accounting for as much as 50% of my collection, its history has been the most difficult to research. There is no logical explanation as to why there is so little factual evidence about the business, and that is why an interview I held in 2001 with Christopher Corfield-Moore, who was Managing Director of Hancock, Corfield & Waller Ltd (“HCW”) in the 1960’s, and whose Great Uncle was Reginald Holbeche Corfield, provides such a valuable insight to this story.

As a person, Reginald was a mixture of maverick, soldier and businessman. A tough decision maker and risk taker, he did not let people stand in his way, family or otherwise.

Reginald was very close to one of his brothers, John, and he later joined him as a director of Hancock, Corfield & Waller Ltd in the 1920’s. John was so close to Reginald he even named his son after his younger brother on his birth in 1901. Their close relationship was to dramatically break down in the 1930’s.

In 1948 he became Chairman of the Gordon Hospital which was famous for its pioneering advances in the field of rectal diseases.

As Reginald had no offspring, he had little or no interest in reinvesting his share of the Company profits back into the business for its future development, whereas reinvestment was the strategy for John and the other directors. This caused a breakdown in the family relationship and in 1935 Reginald earned himself the title of ‘Black Sheep of the Family’. Unusually, and unheard of for the times, Reginald decided to leave the family business and set up in direct competition, and, also adding insult to injury, he persuaded some key employees to join him!

An advertising ruler, pictured at the beginning of this article, was produced at the time of Reginald Corfield Ltd’s inauguration. It advertises their product portfolio as aluminium tablets, waiter trays, metal stampings, posters, showcards and novelties. In truth, I believe that this was much more of a wish list in an attempt to try and replicate “HCW’s” offering. In forty years of collecting, apart from commissioned ceramic items such as jugs and ashtrays, I have never seen any advertising items actually manufactured by Reginald Corfield Ltd other than waiter trays. These products were undoubtedly the commercial backbone of the business.

According to Christopher Corfield-Moore, the early years of trading were challenging for Reginald Corfield Ltd, much to the delight of his rival, and had it not been for the onset of World War II Reginald’s new venture would not have survived.

In 1936 Reginald Corfield Ltd moved its factory to Lombard Road, still in S.W.19.

In 1939 the financial performance of the Company changed dramatically for the better when the Government commissioned the factory to help the war effort. It appears that Corfield’s main focus was on sheet metal production for Allied aircraft. What is for certain is that Reginald Corfield took a personal leadership role successfully overseeing operations throughout the war.

After the war had ended the Company changed its focus to the manufacturing of waiter trays. Reginald Corfield himself started to take a back seat role while other individuals became increasingly involved in steering its future. He died in 1953 aged 80.

Throughout the rest of the 1950’s Reginald Corfield Ltd became the number one player. Their production runs were the highest often with 5,000 trays, and sometimes with 20,000 trays as a high volume order. Between 1955-1961, ‘Reginald Corfield Ltd Lombard Road, London, S.W.19.’ became the most prolific maker’s mark in the history of tray manufacturing. Most antique brewery trays survive from this period due to the sheer number and variety made. Ironically, after the death of Reginald Corfield himself, the Company was at its most successful.

Sadly there are very few records available from this era therefore my research is limited. There are many outstanding questions which I am sure will be answered eventually. 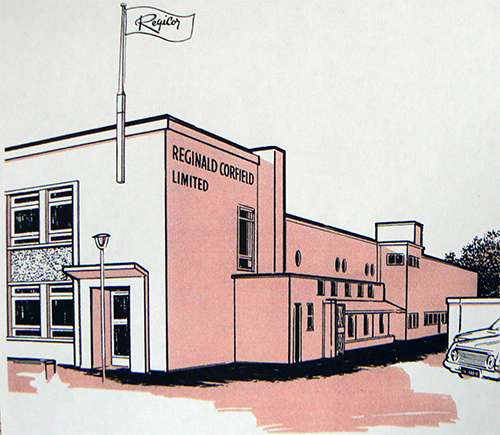 The financial success of the 1950’s enabled the leadership of the Company to explore new more effective printing techniques. One of these new innovations resulted in Reginald Corfield Ltd partnering with the technical sales team of the Esso Petroleum Company. Using Liquid Petroleum Gas (LPG), propane and butane, Reginald Corfield Ltd became the first Company in the UK to trial and install a new propane-fired tin printing oven, used for the production of trays. The Company were the main feature of a specialist engineering journal on 27th July 1962. Extensive trials were performed at the Lombard Road factory in S.W.19 and the success resulted in the building of a new factory. A 70ft long tin printing oven was installed at a 36,000 sq ft site in Redhill, Surrey. Three other 40ft ovens were also purchased. These state of the art machines gave the Company volume, speed and cost advantages over its competitors.

In a leaflet produced for its customers in the late 1960’s it describes the manufacturing process as:

‘Waiter trays are printed by the offset lithographic and screen print processes on tinplate and aluminium, reproduced from artwork and colour transparencies. Each colour is stoved after printing, as is the final alcohol resistant lacquer, resulting in a hard and durable surface….’ 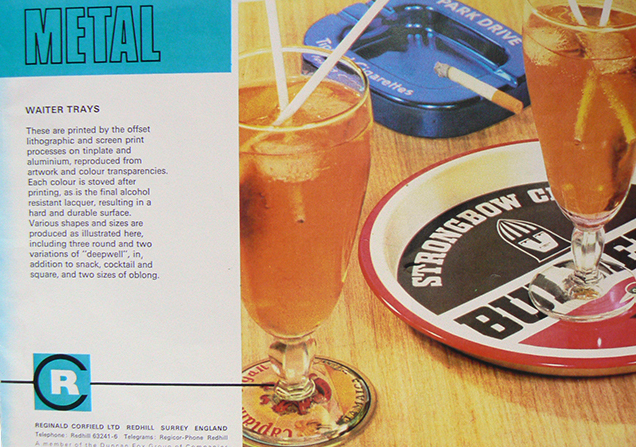 I am unsure as to why Reginald Corfield’s fortunes diminished but sadly, only seven years later, the Company ceased to produce trays. According to Christopher Corfield-Moore the Company was acquired by Huntly & Palmer biscuit makers.

The closure of Reginald Corfield Ltd for me was the biggest cause of the demise of the beautiful ‘waiter tray’ and the main reason why my collection is cut off at 1969. Never again were trays produced in such large volumes. If asked by individuals new to breweriana collecting what would I advise, I would say firstly ‘collect British brewery trays’ and secondly ‘focus on trays produced by Reginald Corfield Ltd’. These trays are still around and can be purchased at reasonable prices.

The list below provides a general guide to date trays produced by Reginald Corfield Ltd from 1935 to 1969.

There are seven main phases, each with unique wording, which is always found at the base of the tray. 95% of trays adhere to this summary:

4. 1945 to 1954 Alloy Trays – Many hundreds of alloy trays were produced but only 3 rectangular trays had a stamped Corfield mark – “Reginald Corfield Ltd Lombard Road London S.W.19.”

6. 1963 – Tin Trays – Using a new ‘state of the art’ printing machine at Corfield’s newly built factory in Redhill, a first batch of trays were tested – “Made in Great Britain by Reginald Corfield Ltd” – Round, Rectangular, Square & Small Round Examples.

7. 1964 to 1969 - Tin Trays – Having completed testing on the new printing machine at Redhill – “Printed in Great Britain by Reginald Corfield Ltd” – Round, Rectangular, Square & Small Round Examples.

For a more definitive list please refer to the attached spreadsheet below.