British brewery trays, or 'waiter trays' as they were originally named, were most probably first produced in the 1880's. I can say this with absolute certainty as I have examples of trays from this era and even one which has 1888 stamped on it.

However it may be possible that trays were first produced in the 1870's and one tray from my collection, an oval Fred Cutler Brewery tray, may be one such example.

The vast majoirty, nearly 69%, of British brewery trays were round, with square trays introduced in the 1950's accounting for 20%, rectangular trays 10% and 1% oval. 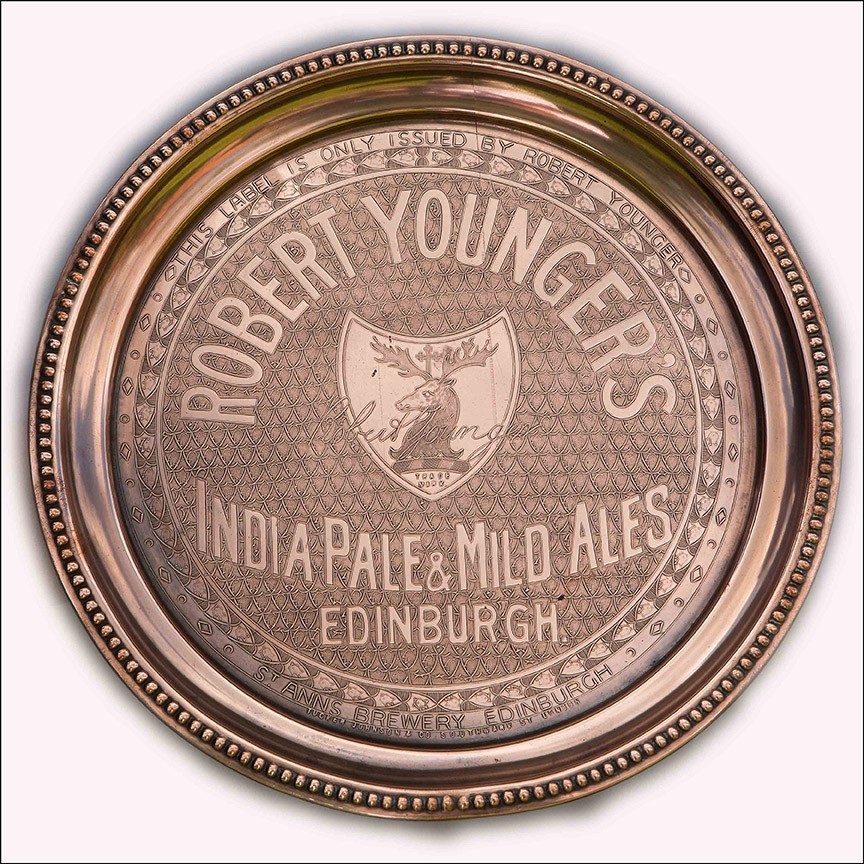 Before the first World War period 1870-1914, trays were produced in brass, copper and enamel.

The first heavy tin trays were produced from around 1900 and I call these black backed trays because the back of each tray is coloured black.

Trays from this era were round in shape with the odd rare early black backed example being either oval or rectangular.

The early brass and copper trays were produced by a range of manufacturers with no one particular company dominating the scene.

After 1900 round enamel trays were produced with these having fairly plain colouring.

A couple of key enamel tray manufacturers during this period were C. E. Wilkins and Prince of Wares.

One of my aims is to have at least 100 good condition turn of the century examples of brass, copper and enamel trays combined as these are difficult items to find.

During the First World War the factories producing trays were converted for the production of munitions. 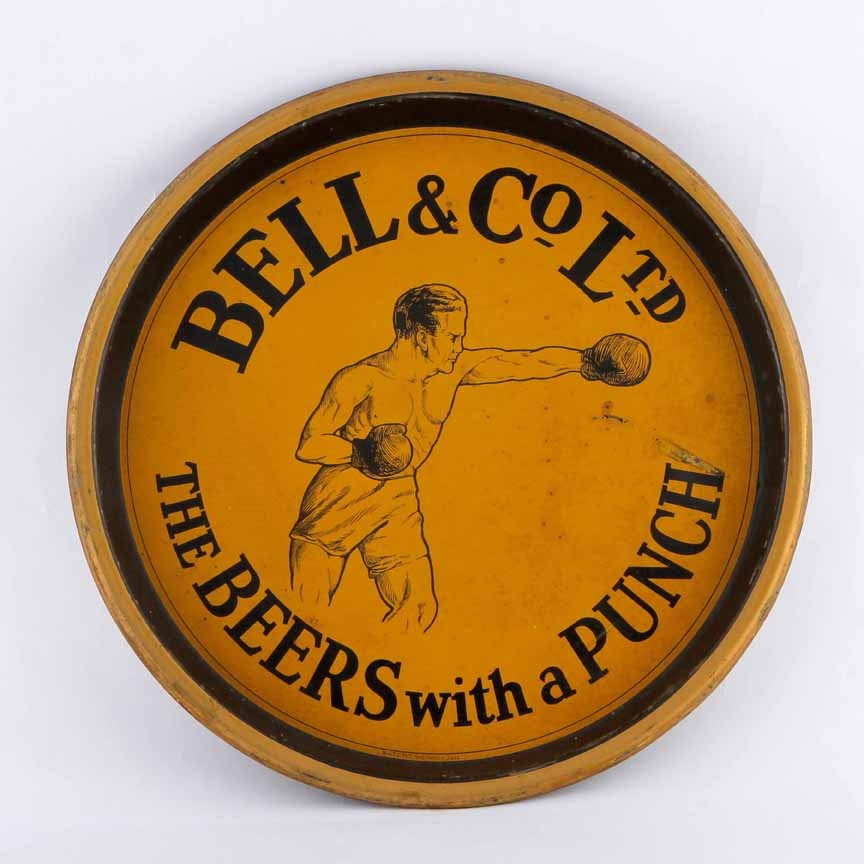 In between the two world wars the vast majority of brewery trays were heavy black backed items again still mostly round, with a few oval and rectangular examples.

During the 1930's two additional black backed tray manufacturers were added to the three companies above, being Reginald Corfield Ltd and Barringer Wallis & Manners Ltd.

Reginald Corfield had worked for Hancock Corfield & Waller Ltd but decided to go it alone in the 1930's, much to the annoyance of his previous employer.

I have to say that this period of mainly black backed trays is my favourite and one in which I'm always happy to pick up an undiscovered tray.

To complete the picture of this era some brass, copper and enamel trays continued to be produced especially during the 1920's.

I would be happy to add any square brass, copper, enamel or black backed tray produced before 1939 as I only know of one that exists, a Worthington's from the 1930's.

During the Second World War the factories producing trays were converted for the production of munitions. 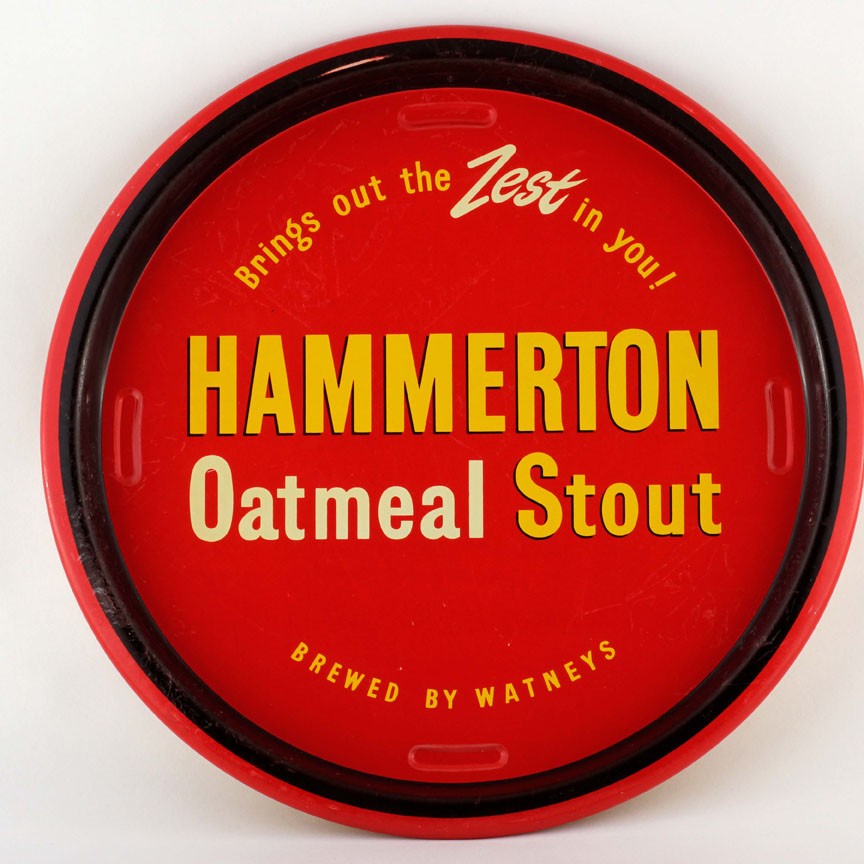 I have separated these ten years because the majority of trays produced were made from alloy.

Alloy trays are the lightest in weight and they came about from excess material used in aircraft manufacturing during WW2.

The contrast in the weight of trays before and after WW2 is a great clue as to whether a tray is pre or post war.

The main shape of an alloy tray remained round, although a number of rectangular alloy trays were also produced during this period.

Surprisingly, and I don't know why, most round alloy trays did not display a manufacturer's mark.

The latter part of this era saw the introduction of square trays for the first time.

The earlier square trays were lighter than those produced at the back end of the 1950's and throughout the 1960's.

Three manufacturers dominated production during this period and they were Reginald Corfield Ltd, Hancock Corfield & Waller Ltd and The Metal Box Co Ltd.

Other materials that were used in the production of trays during this period included bakerlite, chrome, aluminium and even plastic. 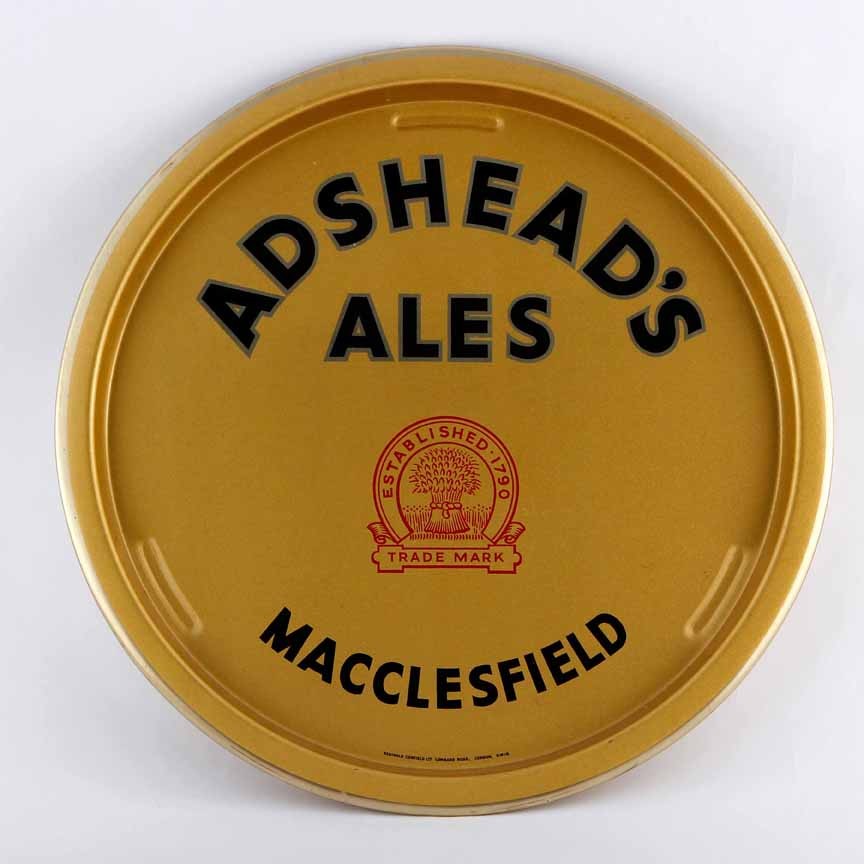 The final era was dominated by three manufacturers who used one material.

The three manufacturers were Reginald Corfield Ltd, Hancock Corfield & Waller Ltd and The Metal Box Co Ltd all of whom used tin as their main material.

These tin trays were mainly square and round with a number of rectangular examples also produced.

The weight of a tin tray manufactured during this period was much heavier than equivalent trays produced in the early to mid 1950's.

Rather bland mono coloured trays made of aluminium and chrome were also produced during this era with the main manufacturers being Mermaid and Samuel Groves Ltd.

To complete the story, smaller round trays were introduced in the late 1950's, and these continued to be manufactured throughout the 1960's.

The collection represents a century of British brewery trays with the rough chronological order of materials used in the manufacture of trays being:

The manufacturers who produced the largest number of trays in my collection were Reginald Corfield Ltd (33%), Hancock Corfield & Waller (14%) & Metal Box Co (9%).

I can remember the 1960's fondly and can particularly remember being taken to country pubs by my parents with Dad inevitably bringing the drinks to the garden on a waiter tray.

Waiter trays were used less and less through the 1970's and were virtually non existent by the end of the 1990's.

I believe this collection captures the history of one of Britain's unsung advertising items- enjoy!