The following article is a summary of the interview. 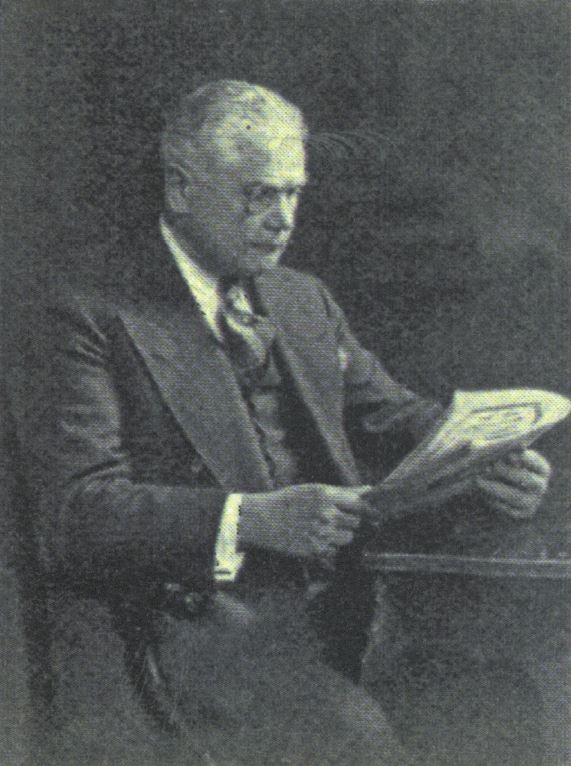 John Corfield was born in the West Country in 1871, his father being General Manager of a company named J.C.Wall based in Bristol. J.C.Wall was a respected company who held the rights to move goods 500 yards from Bristol Docks to the railhead. On his 21st birthday John’s father gave him a £5 note as a present with which John bought himself a cygnet ring. John’s father, being of strict Presbyterian faith objected to the purchase of the ring, the two disagreed and John took off to seek his fortune in London.

By 1893 John was working for Hancock’s, manufacturers of household goods, based in Bermondsey East London. John was a frequent visitor to London Men’s Clubs and there he befriended a number of individuals from the brewing, distilling and mineral water industries. One of his best friends became Arthur Dewar and together the two were responsible for promoting whisky as a trendy drink to compete with brandy, the popular drink of the day. In 1896 John Corfield was promoted to partner, responsible for the management of the business.
The company was renamed Hancock, Corfield Ltd. Around 1900, as Hancock had no family, he offered John the factory at a very reasonable price and John accepted.

After four more years, in 1904, the business had outgrown its premises in Bermondsey so with additional capacity needed, John risked all and invested in a new factory based in Mitcham, Surrey. The Imperial Works in Mitcham was a great success and soon had to be extended with the addition of extra floors and a second building including a design/drawing office. Amongst John’s first customers were those individuals he had befriended at London Men’s Clubs including Dewar’s whisky and it’s therefore a high probability that one of the first trays ever produced at the Imperial Works was one for this customer. 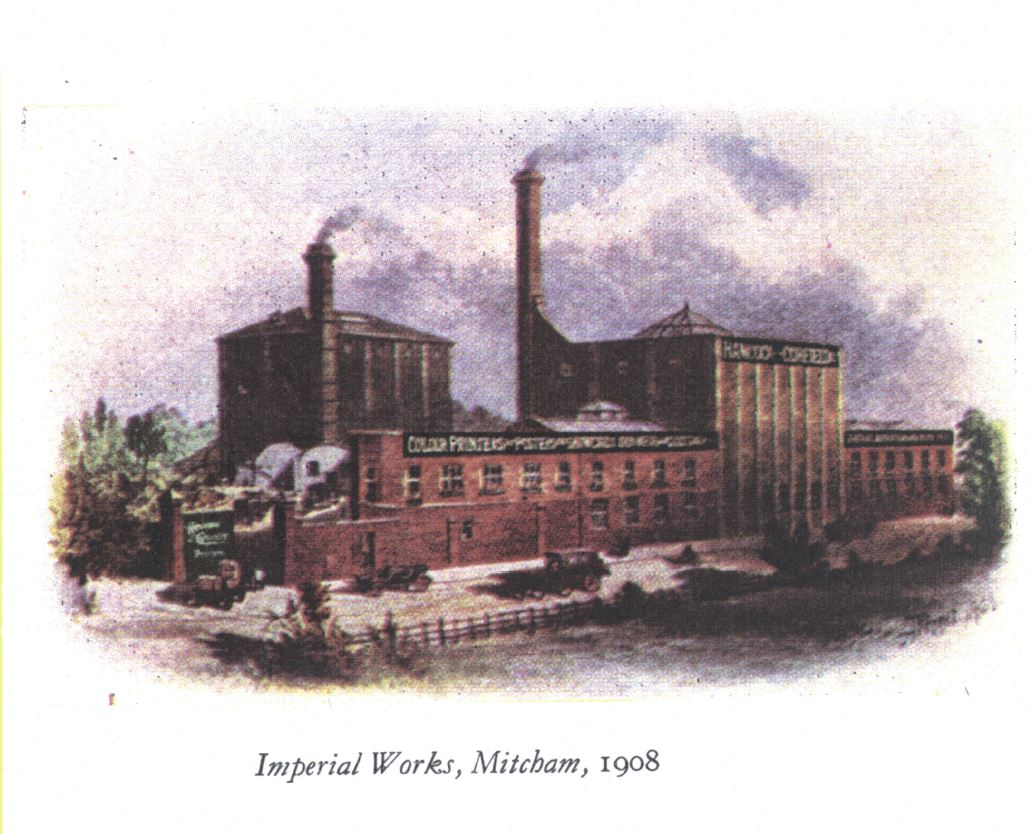 In 1914 business was interrupted by the outbreak of World War I. Much of HCW Ltd’s continued success during this period was not due to tray manufacturing. Metal printing was put on hold and for the next four years the Imperial Works produced millions of items for the British Forces. One of the biggest successes, and HCW Ltd’s speciality, was water-bottles which were pressed on the machines which had previously produced showcards and waiter trays. These same bottles were then covered in khaki by the factory’s considerable female labour force who became disrespectfully known as “the sewing party”.

In 1904 a Mr W.H.Waller had joined HCW Ltd as the Marketing Director and, as a recognition of his services the company name was changed to Hancock, Corfield & Waller Ltd in 1919 (the name is still in use today). Although waiter trays continued to be produced during this period it was thanks to Prohibition in the USA (1920 – 1933) that the company was successful. During WW1 HCW Ltd had acquired, as a part of its service policy to the distilling and brewing industries, the patents of a non-refillable capsule. This product was a top that ensured the contents of whisky, spirit and beer bottles could not be tampered with. During Prohibition customers buying alcohol were determined to ensure that what they were drinking was the real stuff and not some imitation poorer substitute. The USA trade flourished. After Prohibition ended, advertising items, in particular waiter trays, became the best seller for HCW Ltd.

During the 1920’s John Corfield employed his younger brother Reginald Corfield. The two brothers were very close, so much so that John named his son Reginald Holbeche Corfield on his birth in 1901. As time passed a difference of opinion caused a rift between John Corfield and Waller on one side and Reginald Corfield on the other. John Corfield and Waller were keen to continue their strategy of re-investment especially with their children’s succession in mind, whereas Reginald preferred to spend profits personally. As relationships deteriorated Reginald decided to quit HCW and start up his own rival business locally on Morden Road and so Reginald Corfield Ltd was established in late 1935. Tensions were increased when Reginald took a number of key staff with him. However, whilst HCW Ltd prospered, Reginald Corfield Ltd struggled to keep afloat. Fortunately the outbreak of World War II gave him another chance.

In 1939 John Corfield died and the leadership of the company passed to his son Holbeche who then had the difficult task of managing the business through the war years. For approximately one year the company once again produced similar products to those during WWI. Then on 26th September 1940 the Luftwaffe struck and the original Imperial Works in Mitcham stood no longer.

Fortunately some of the equipment was salvaged and restored and two engineering companies, which were part of the Corfield group based in the Colliers Wood area, were able to accommodate HCW Ltd. The office staff were moved to a nearby private house which itself had been bomb-damaged – there were no windows. HCW Ltd continued to support the war effort and products included display plates such as “Beware of ……” and also aluminium containers for flares. By this time the use of tin plate in the manufacturing process had been restricted by the government and as a result aluminium became the primary material. The original Imperial Works was demolished and the site literally became a windswept open space. Plans however were already being drawn up for a new factory. 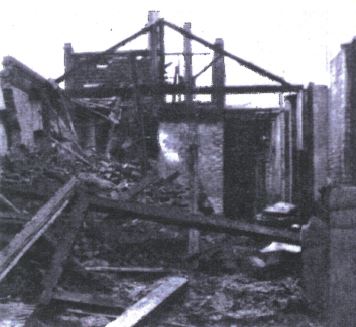 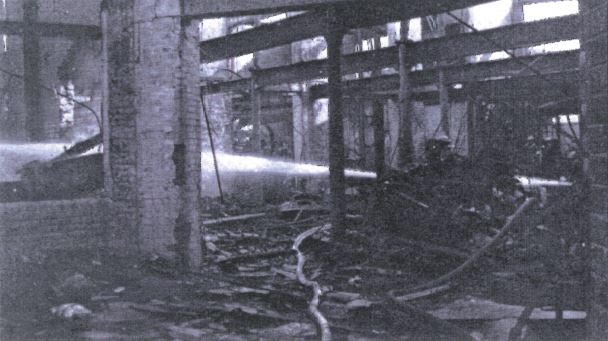 With the war ended Government restrictions on building, on steel and on capital investment, successfully delayed a return to the original site in Mitcham. As far as waiter tray manufacturing was concerned HCW Ltd, and other manufacturers, were forced to use aluminium for another ten years. Surprisingly, and for a reason I have yet to understand, all trays produced in aluminium by HCW Ltd, did not have their maker’s mark displayed at the base of the tray. For all other eras of tray manufacturing from the 1880’s to the 1980’s makers marks were a standard feature of most trays. In 1955 tin plate restrictions were lifted and once again trays started to be produced from this material although at a considerably reduced weight when compared to pre-war items.

The new Imperial Works factory had been built by 1958 and it is likely that testing of production runs started in that year. What is not in doubt is that by 1960 the new plant was fully operational again. After twenty years of manufacturing from a “temporary residence” HCW Ltd finally moved into their “all singing all dancing” factory – The Imperial Works was back. 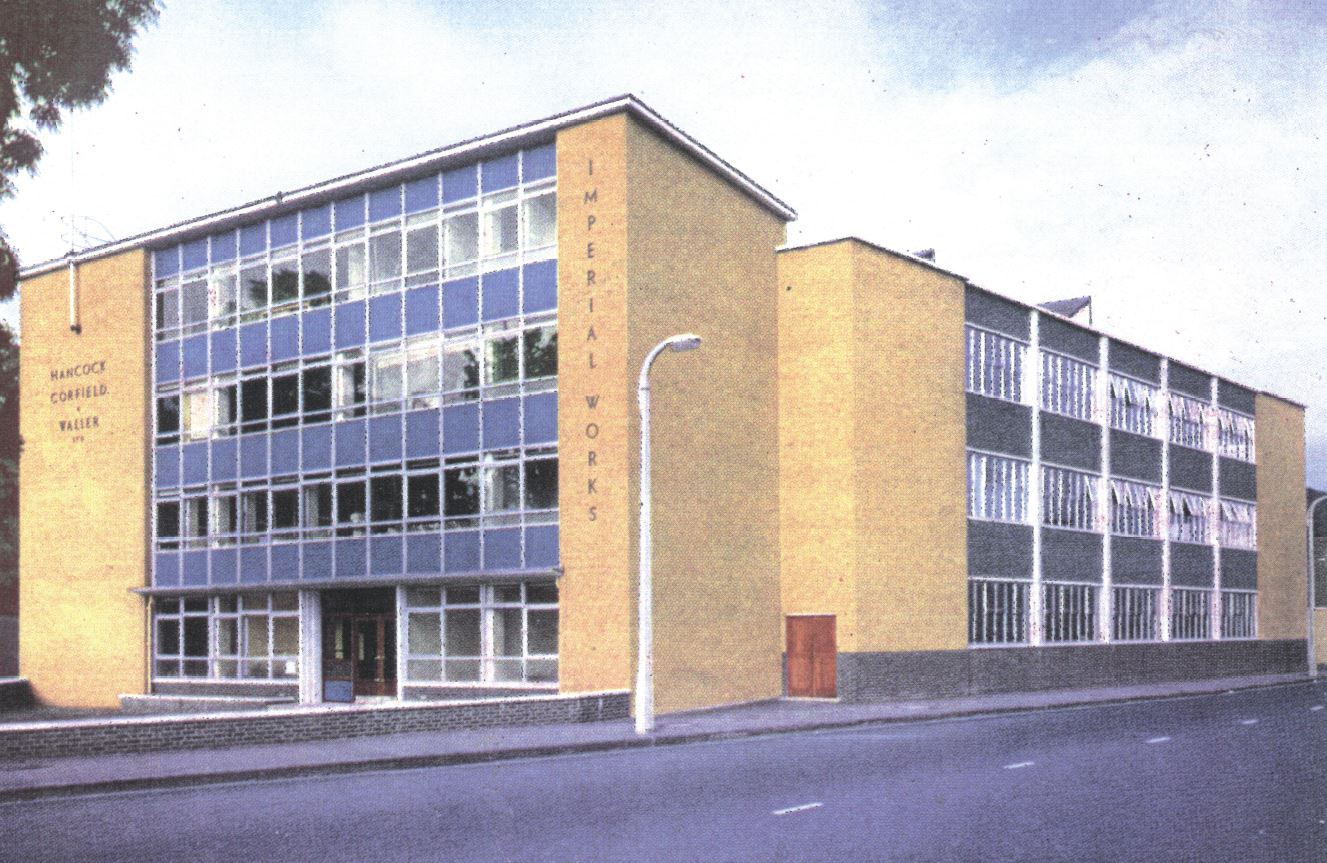 The statement from R.Holbeche Corfield, now aged 59, in 1960 sums up the situation and the mood at the time:

“Few of us would have believed that those temporary premises were to become an almost permanent home and that it would almost be twenty years before the company would return to its traditional site!”

The statement goes on

“Restrictions on steelwork, on building and on capital investment during the early post-war years made it impossible for us to rebuild the factory to the standards we wanted.
……We preferred to take the time necessary to design a new, modern plant, tailored from the ground up, to the latest techniques in our industry.
……After twenty years all departments of our company are assembled under one roof, ready and better equipped than ever to provide whatever service our customers require.”

In 1966 R.Holbeche Corfield retired and his son Christopher Corfield became Managing Director of the Corfield Group. Hancock, Corfield and Waller Ltd continued manufacturing until circa 1970 when they merged with Midland Aluminium Ltd. The company’s history after that date is somewhat blurred but I believe that much of their tray production was outsourced, probably in the early days to The Metal Box Company. Although the cut off on my tray collection is 1970 I still have a few examples where the makers mark states “MB/HCW”, a reference to both Metal Box and HCW Ltd having a trade agreement. These trays date from around 1970 until the mid 1970’s.

The name Hancock, Corfield & Waller Ltd lives on today with the company being based in Epsom, Surrey, although these days it outsources all its manufacturing. Hancock, Corfield & Waller Ltd ceased manufacturing of any item in 1978. When in contact with their current Managing Director Alan Meldrum, he stated that during the past two years we have only had one order for trays – a sign that the use of brewery trays in Britain is almost dead!

After his retirement Christopher assumed the surname of his ancestors Corfield-Moore. He died peacefully in 2006.

Belated thanks for helping me produce this story.